Singer (mezzo), dancer
Demeter is a principal character in Cats. She is one of the main female singers, particularly noted for her duet with Bombalurina in "Macavity the Mystery Cat".

She is often the target of Macavity's attacks in the musical due to her unspecified history with him. Burdened by her troubled past, Demeter is extremely neurotic and paranoid. She is also very close to Bombalurina and the two are rarely apart.

Demeter is a very anxious and easily startled cat, constantly fearful that Macavity is around. While her past relationship with Macavity is left vague in the musical, Cats choreographer Gillian Lynne elaborated on their relationship in a 1982 documentary:

Demeter is one of the few cats sympathetic to Grizabella right from the start. She attempts to welcome the older cat, but cannot bring herself to fully accept Grizabella until after "Memory". She usually runs to Bombalurina in uncomfortable situations, such as when Grizabella or Macavity are nearby.

Demeter and Bombalurina are inseparable, though the exact nature of their relationship is not specified within the show. Bombalurina is her strongest protector and comfort for the duration of the musical. In most replica productions, she forms a relationship with either Munkustrap or Alonzo by the end of the show, showing affection to the tom and staying close to him after the fight with Macavity.

In some versions such as the 1998 film, she finds outgoing, vain toms such as Rum Tum Tugger to be annoying, and shows no interest in his posturing. However, in other productions she is as enthused about him as the other female characters her age.

Demeter sings as part of the Gumbie Trio in "The Old Gumbie Cat" with Bombalurina and Jellylorum, and sings a solo verse in "Grizabella the Glamour Cat". Her biggest part is in "Macavity the Mystery Cat", which she sings and dances with Bombalurina. She is usually played by a mezzo soprano or alto singer.

Throughout the musical, she attributes every disturbance to Macavity, resulting in a few false alarms. When he does finally show up, she is the focus of his attack - Macavity appears disguised as Old Deuteronomy to infiltrate the tribe and Demeter is the only cat to realise the deception. Despite her fears, she lunges at him to reveal his true nature to the tribe. At one point in the London production, lines of speech were added to clarify the action in the show, with Macavity saying to Demeter "I'll be back for you!" while kidnapping Old Deuteronomy.

The fight between Macavity and Munkustrap (and sometimes, Alonzo) is started by Macavity attempting to kidnap Demeter from the tribe. Starting from Broadway, most 1980s and 1990s productions had Munkustrap knocked out of the fight early on, and it was Alonzo who took the majority of the fight. In these productions it was implied that Demeter and Alonzo are a couple. In later productions, after the 1998 film, Demeter is generally paired with Munkustrap after Macavity's attack.

Demeter's name is mentioned in "The Naming of Cats" as one of the "fancier" but still "sensible" names. T S Eliot named her after the goddess of the harvest and agriculture from ancient Greek mythology.[2]

The following names have also been used for the character of Demeter in various international productions:

Demeter is black and gold/yellow with a white bib, and wears gloves instead of arm warmers. Her wig is often wild and fluffy. In some productions, she has larger patches of red/ginger among the gold and yellow tones. Her costume demonstrates her conflict - she is both an elegant queen, ladylike and beautiful, and a tortured, skittish, unhappy soul. She is usually portrayed as an adult. 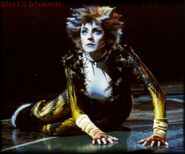 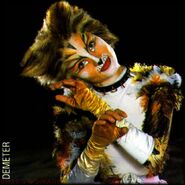 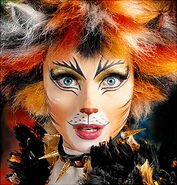