Kitten
Coricopat is an ensemble character in the 2019 Cats movie. He is portrayed by Jaih Betote.

The movie character has little in common with his stage counterpart, save for being an ensemble dancer. Instead, this Coricopat is an energetic and playful kitten who, much like Bill Bailey/Tumblebrutus in the stage show, is the main tumbler of the cast.

Coricopat is an energetic kitten who is often seen doing various acrobatic tumbles. He is rather bold despite his young age, getting up close to Victoria when they first meet to sniff and size her up. Later at the Ball, he somersaults right into the centre of the dance circle to show off his dance skills. He can also be quite mischievous, keeping Mistoffelees' hat out of reach during "Jellicle Songs for Jellicle Cats", causing Mistoffelees to lose his balance and fall.

Coricopat is in all the ensemble numbers and has several solo lines in "Jellicle Songs for Jellicle Cats". He also has a solo featured moment during the "Jellicle Ball", impressing Old Deuteronomy and the other cats with his acrobatic prowess and break dancing. Along with fellow kittens Tantomile and Jellylorum, Coricopat is seen looking upset when Gus calls them out for not being well trained.

He appears to be a brown striped tabby, and wears a brown collar with a gold-coloured bell. 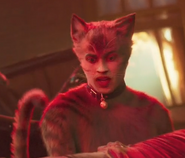 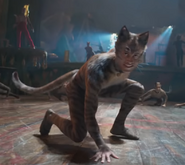 Coricopat dancing at the Ball, Trailer #2

Feel free to add any headcanons or theories you have about Coricopat. But don't delete other people's ideas.