Behind the scenes, thousands of the world's best performers audition to be in Cats. The requirements for each role vary a little across different productions.

These productions follow the direction of Trevor Nunn and Gillian Lynne, and represent the characters as envisioned by the original creative team. 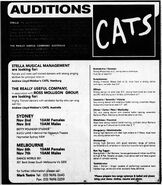 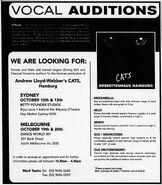 Casting Calls for Hamburg and Berlin 2002:

FEMALE AND MALE WELL TRAINED DANCERS WITH STRONG SINGING ABILITIES ALSO ACROBATS WHO DANCE WELL for the roles of:

Audition for Dancers: Open call auditions for "Cats"
National tour for the 2009-2010 Season. Paid positions
Auditions being held on April 7, 2009 for the National Tour of "Cats"
These are all Paid Positions. (Salary + Per Diem + Housing + Health insurance)
Seeking dancers for the following roles:

Excellent dancers with good vocal ability, acrobats with a high level of dance and very good singers with both good belt and classical voices.


OPEN CALL FOR DANCERS
FEBRUARY 20th SIGN IN AT 10.00
Please bring a CV with a photo

LEADING ACTORS BY APPOINTMENT ONLY
FEBRUARY 21st
Please send your CV with a photo.

Dancers and leading actors please prepare a ballad and an up-tempo number, and bring the sheet music.
Auditions will take place at PINEAPPLE DANCE STUDIOS, 7 Langley Street, Covent Garden, London WC2H 9JA.
Call backs are planned for March 12th and 13th, in Düsseldorf. Rehearsals will start at the beginning of August; the premiere is at the end of September in Cologne and the contracts are running until spring 2013.

Rehearsal start: mid of July 2019 Opening night: mid of September 2019 at the RONACHER

For the original production of the hit musical CATS Vereinigte Bühnen Wien are looking for excellent dancers with good vocal ability, acrobats with a high level of dance and very good singers with both good belt and classical voices:

Knowledge of the German language is required as the show will be performed in German.

Not replicating the direction of the original production, these shows each have their own angle on the characters. While the written music remains the same, the interpretation of the roles can vary according to each Director's vision.

We are also looking for:
Acrobats or free runners.

New York – Auditions for 'Cats'
White Plains – Auditions will be held at the White Plains Performing Arts Center, New York. All performers must be 18 or older.
Union and non-union performers – Casting triple threats – singers who can dance and act.
"Because of the short, intense rehearsal schedule, we are seeking real triple-threats – strong dancer/singer/actors, especially those who have done the show before. There are also roles available FOR STRONG SINGERS with minimal to no dance required.
OPEN Auditions are by appointment only
Monday, 10/17/11, 6-10 PM at WPPAC.
Please see below on how to get an audition time slot.
All roles including chorus are available, including the following roles: