Adult
Cassandra is a prominent ensemble character in the 2019 Cats movie. She is portrayed by Mette Towley.

She is a haughty and fierce protector of the tribe. Her role in the movie appears to be based on the stage version of Bombalurina, even down to being very close to Demeter, the main exception being that she does not sing "Macavity".

The movie character retains many of her stage counterpart's personality traits, including her haughtiness and disdain for some of the other cats.

Cassandra is a loyal and fierce protector of the tribe. She is rather hostile towards outsiders such as Victoria and Grizabella, with Munkustrap having to step in when she gets too aggressive with them. She is initially wary of Victoria, often sizing her up and trying to intimidate her, even hissing at Mistoffelees when he tries to intervene. During the "Jellicle Ball", she pushes Victoria into the middle of the dance circle, putting her on the spot. Cassandra regards Grizabella with unbridled animosity and is very protective of the kittens when the older cat is around. When Grizabella first appears, Cassandra and Demeter mock and belittle her. Cassandra later spots Grizabella during the Ball and chases her out. However by the end of the movie, she is moved by Grizabella's rendition of "Memory" and is elated when Grizabella is chosen as the Jellicle Choice.

Throughout the movie, Cassandra shows her willingness to defend the tribe, particularly from the villainous Macavity. When Macavity shows up at the end of Bustopher's number, most of the cats run and hide, with only Cassandra, Munkustrap and Alonzo approaching him cautiously. As one of the last cats to be dosed with catnip at the Ball, she tries to keep Old Deuteronomy and Victoria out of harm's way, protecting them from Macavity and his agents, but she ultimately succumbs to the catnip herself.

Cassandra and Demeter are rarely apart, with the latter often following Cassandra's lead. Cassandra is initially dismissive of Mistoffelees' magical abilities and has little patience with his attempts to impress Victoria. However, she slowly gains confidence in him during "Magical Mister Mistoffelees" and is as grateful and impressed as the other cats when he successfully brings Old Deuteronomy back.

Cassandra has several solo lines in "Jellicle Songs for Jellicle Cats". Later, she and Demeter aggressively question Victoria about her name, leading Munkustrap to explain "The Naming of Cats". During "The Rum Tum Tugger", she flirts and dances with Rum Tum Tugger and sings the "curious beast" line. She is later seen in a trash can with him and Demeter. Cassandra's biggest vocal part comes in "Grizabella: The Glamour Cat", which she sings with Demeter. Her dancing is also featured throughout the movie.

Cassandra is a tall brown cat with very sharp claws and a gold chain collar. She looks very similar to her stage counterpart, except that she has visible fur covering her body. 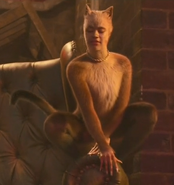 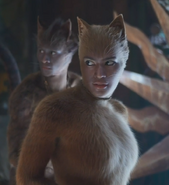 Cassandra spots Grizabella at the Ball 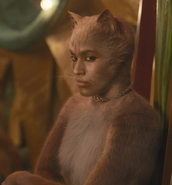 Cassandra has no confidence in Mistoffelees

Feel free to add any headcanons or theories you have about Cassandra. But don't delete other people's ideas.