Dancer
Cassandra is an ensemble character in Cats. She is primarily a dance role, usually portrayed as a beautiful and haughty sleek brown queen.

Cassandra is usually portrayed as somewhat set apart from the other cats - her costume marks her out as a different breed from the others, being devoid of visible fur. She is beautiful and elegant, with the tall, lithe body of a dancer, and is often aloof with the other cats. Cassandra dislikes the childish antics of the kittens, alerting Skimbleshanks when one of them messes up the formation by switching places with her during "Skimbleshanks: The Railway Cat".

Occasionally, she is played as a more lively and flirtatious young adult rather than being entirely cold and distant. Cassandra generally keeps to herself but is sometimes depicted to be close to Alonzo in London-based productions.

Cassandra is mainly a prominent female dancer in the show, though she also has solo lines in both "Jellicle Songs for Jellicle Cats" and "The Song of the Jellicles". She is a featured dancer in "Macavity the Mystery Cat" along with the other queens, and plays a prominent part in "Magical Mister Mistoffelees", acting as Mistoffelees' assistant and helping bring back Old Deuteronomy.

Cassandra is initially disdainful of Grizabella, acting erratically and haughtily towards her during Grizabella's introductory number. However by the end of the musical, she is just as moved by Grizabella as the other cats.

The name "Tantomile" is used for the character in the Japanese production.

The name "Cassandra" is not mentioned in "The Naming of Cats". It was likely chosen by the London production team due to its ancient Greek origins, similar to how many of the other characters in Cats are also named after ancient Greek figures. Spelling variants include Kissantra (Finnish) and Kasandra (Polish).

The following names have also been used for the character of Cassandra in various international productions:

Cassandra is portrayed as an exotic, purebred brown and cream - possibly a Siamese, Sphinx, Burmese, or Abyssinian cat. Performers of the role such as Charlotte d'Amboise and Lyne Tremblay have referred to her as Siamese. Her wig is very short and her ears are elegantly rolled. She is the only cat with no shoulder fur/fluff; her shoulders are smooth, and she has no arm or leg warmers. Her tail is braided rather than fluffy. Her costume is airbrushed rather than painted or sponged, which makes her look quite different to the rest of the cats. She varies little between productions; in some, she is more solid brown, while in others she has a more pronounced pale body and darker extremities. 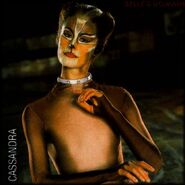 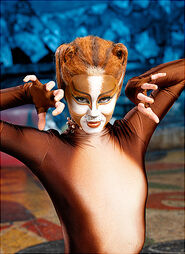 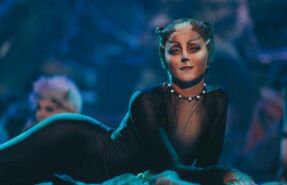