Dancer, Acrobat
Carbucketty is an ensemble character in the musical Cats. He is usually portrayed as a mischievous tom kitten, with the role primarily being that of a dancer and acrobat.

The character originated in the London production, but has been renamed Pouncival in many subsequent productions.

Carbucketty is usually portrayed as a young, troublesome, fun-loving kitten. He is often seen causing trouble or messing about with the other kittens such as Bill Bailey, Electra, and Etcetera. The other cats sometimes find him bothersome, shooing him off when he gets in their way.

Carbucketty is sometimes played older in productions that include both him and Pouncival. For example, Giuseppe Bausilio specified that in the Broadway revival, Carbucketty is a teenage cat[1] whereas Pouncival is the young kitten. Even then, Carbucketty was still depicted as one of the more mischievous and impressionable characters who wasn't taken seriously by the other cats.

Carbucketty is principally a dance role, with the performer also usually being a strong acrobat. His dancing is featured quite prominently during the "Jellicle Ball". He also typically plays the lead Pollicle in "The Awefull Battle of the Pekes and the Pollicles".

In "The Old Gumbie Cat", the character is seen trouble-making while dressed up as a beetle. During Grizabella's first entrance, Carbucketty - egged on by Bill Bailey and Admetus - tricks her into coming close to him so that he can scratch her. He gets up to no good again during Grizabella's second entrance, this time shoving her.

The actor playing Carbucketty is usually the first understudy for Mistoffelees, and so is a strong ballet dancer as well as being able to pull off a mischievous kitten.

In most Australian style productions, Carbucketty was an occasional chorus cat/on-stage swing of variable costume design. When the London revival changes were imported in 2015 however, Carbucketty was added as a full, understudied character, in addition to Pouncival. However, Pouncival retained all of his original featured dance parts and character, while Carbucketty became the sixth member of Growltiger's crew, effectively switching the names from the London revival roles.

In the Japanese tradition, Carbucketty is played as a serious adult cat with a personality and makeup reminiscent of Alonzo's, and Gilbert replaces him as an ensemble kitten.

The name "Carbucketty" was invented by T S Eliot for a "knockabout cat",[2] whereby knockabout means "rough and boisterous" or "slapstick comedy". The name itself is some blend of "car" and "bucket", which the Japanese production suggests could be a reference to car (bucket) headlamps.[3]

His name is sometimes spelled as "Carbuckety".

The following names have also been used for the character of Carbucketty in various international productions:

Carbucketty is a small, scruffy, Tabby and White kitten, with gold/brown/black stripes and hatching on a pale base. He usually has a distinctive light brown patch over his left eye.

Since the 1998 film used the name Pouncival but the costume for Carbucketty, it has become common for productions to do likewise and use Carbucketty's stronger design for the role named Pouncival. 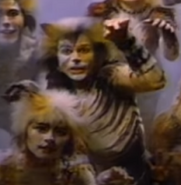 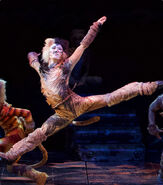