Bustopher Jones is a featured character in Andrew Lloyd Webber's Cats. He appears only in the number "Bustopher Jones", and does not have an ensemble identity as such.

Bustopher Jones is a parody of an Edwardian gentleman of leisure. He is described as the St. James's Street cat, a regular visitor to many gentlemen's clubs in the area, including Drones, Blimp's, and The Tomb. He is shown to be genial, cheerful, a personality who enjoys life to the fullest. He is particularly interested in fine dining and the cuisine available at the different clubs. However at the first sign of trouble, he leaves as swiftly as he can.

Bustopher is a smart cat "with a coat of fastidious black" and "White Spats", immaculately groomed and well turned out. Because of these traits, he is described as "this Brummell of cats" - a reference to Beau Brummell, the founder of dandyism.

He is featured in the song about himself: "Bustopher Jones". He is the central character in this song and usually doesn't appear for the rest of the performance. The actor who plays Bustopher Jones usually also plays Asparagus / Growltiger, however in the original London production, he was played by Brian Blessed who also played Old Deuteronomy.

The first part of Bustopher Jones' name is likely a blend of "Buster" and "Christopher", both common English given names. Similarly, "Jones" is a common English surname.[1]

The following names have also been used for the character of Bustopher Jones in various international productions:

Bustopher Jones, like Mistoffelees, is a black and white tuxedo cat. Due to his constant lunching at clubs, he is "remarkably fat" ("a 25-pounder"). He has a "fastidious black" coat and apparently has white markings on his paws which resemble spats. He also carries a huge silver spoon like a staff (except in the 2016 Broadway Revival). His wig often has small rolled ears slightly resembling those of Jennyanydots.

In the original London production, Brian Blessed played both Bustopher Jones and Old Deuteronomy. As such, his "basic" ensemble costume design was based on Bustopher Jones (the first role in the running order), as seen in the black body and white bib. The design drawing is also corrected from "Bustopher" to "Old Deut" for the Broadway production, when the roles were changed to give Bustopher to the actor playing Asparagus.

Many of the featured "Song" costume designs were re-drawn in 1981/82 for the Broadway production, resulting in two versions of the designs. The Broadway design for Bustopher Jones is more polished as artwork, and features a portrait of Brian Blessed in the role. However as a costume design the elements essentially the same. 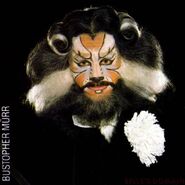 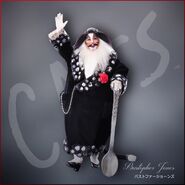