Female
Bombalurina is a featured character in the 2019 Cats movie. She is portrayed by Taylor Swift.

The character's role in the movie bears little resemblance to the stage version, save for singing "Macavity: The Mystery Cat". Instead, the movie version of Bombalurina is a villain who works with Macavity. She does however retain her usual confidence and sensuality.

Bombalurina is one of the villains in the movie, working with Macavity while Mungojerrie and Rumpleteazer serve as her sidekicks.

Bombalurina makes her entrance by crashing the Jellicle Ball. She sings "Macavity: The Mystery Cat" while catnipping the Jellicles with the help of Mungojerrie, Rumpleteazer and Griddlebone, thus allowing Macavity to kidnap Old Deuteronomy.

Bombalurina is a ginger Bengal cat in the film. She wears a highly detailed and ornate collar and silver high heels. 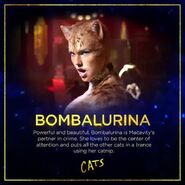 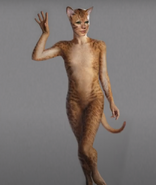 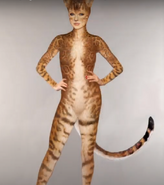 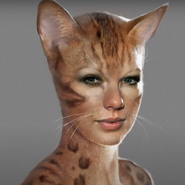 Feel free to add any headcanons or theories you have about Bombalurina. But don't delete other people's ideas.