Dancer, Acrobat
Bill Bailey is an ensemble character in Cats. He is a playful and acrobatic tom kitten.

The character originated in the London production, initially as a nameless kitten and only later given the name "Bill Bailey". The same role was then renamed "Tumblebrutus" on Broadway.

Bill Bailey is one of the youngest male kittens, mischievous and easily excited. He is usually seen with the other young toms, Carbucketty, Admetus, and George and Victor when they appear.

Bill Bailey is principally the main acrobat of the cast, as well as being a dance role. He is rarely centre stage, but often pulls focus with his tumbling antics in the background. The character usually has a few vocal lines in the group numbers.

In some UK productions, Bill Bailey joins the female kittens in squealing over Rum Tum Tugger. He is also sometimes the kitten swinging on the trapeze in "Jellicle Songs for Jellicle Cats".

"Bill Bailey" is mentioned in "The Naming of Cats" as one of the "sensible, everyday names". Literary scholars believe that the name was conceived by T S Eliot for a cat that likes to stray from home, inspired by the popular 1902 song "Won't You Come Home Bill Bailey".[1]

Before he was given a name, the character was originally credited as one of "The Kittens" in the London production.[2]

The following names have also been used for the character of Bill Bailey in various international productions:

Bill Bailey is a white and brown patched tom cat, often depicted in the show as a kitten. Of all the Cats with dual names/personalities, his appearance remains the most consistent, having a distinctive brown patch over one eye, and brown patches on his right shoulder and left hip. 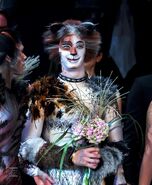 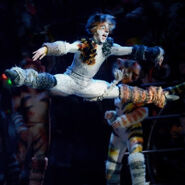 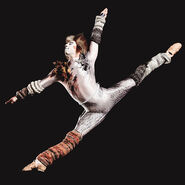