Asparagus is an ensemble character in the musical Cats. He is the chorus identity of the actor who also plays Gus, the Theatre Cat, Growltiger and Bustopher Jones.

In the Broadway revival, the ensemble identity was given the name "Peter", and he doubled as Gus and the Rumpus Cat.

Generally Asparagus is seen with the older cats or minding the kittens. He is usually slightly absent-minded, a bit grumpy and he prefers to doze in a corner than be too involved in the goings-on around him. He is particularly confused by the start of the Gumbie Cat number, where he remains in a corner of the junkyard while everyone around him dresses as Beetles.

Whether or not he is considered the same character as Gus, the Theatre Cat, depends on the production. After Gus' solo in act 2 it is usually clear that Asparagus is still old and doddery, cared for by everyone but particularly Jellylorum and Old Deuteronomy. At this point he wears a more distinctive "Gus the Theatre Cat" wig rather than the generic short ensemble wig.

Asparagus is generally understood as the name of the chorus character played by the actor who is more recognisable for playing Bustopher Jones, Gus the Theatre Cat, and Growltiger. When the actor is not in one of these featured roles, he blends into the ensemble, mainly at the very beginning and end of the show. He usually has one moment in the spotlight after "Jellicle Songs for Jellicle Cats", when he and Munkustrap spot -

There's a man over there with a look of surprise
As much as to say, well now how about that?
Do I actually see with my own very eyes
A man who's not heard of a Jellicle Cat?

Unlike in the stage show, Tony Timberlake played Asparagus throughout the 1998 film, while John Mills played Gus, the Theatre Cat, and James Barron played Bustopher Jones.

The following names have also been used for the character of Asparagus in various international productions:

Asparagus is a brown, gray and black cat. He blends into the background with no bright colours or bold markings, however onstage he usually has a shawl/collar rather than individual fluffies on his shoulders. As with Admetus/Macavity, Asparagus' makeup is a very simple design that the actor can enhance and replace quickly as he moves between roles. The actor starts the show as ensemble Asparagus, changes to Bustopher Jones, then back to ensemble for the rest of act 1. During the interval he layers Growltiger underneath Gus's blanket/coat, and after his solo, changes back to his ensemble look. However after his solo he sometimes retains Gus' wig rather than his shorter, neater ensemble wig, this helps the audience identify him as the old cat Gus without the bulky coat. 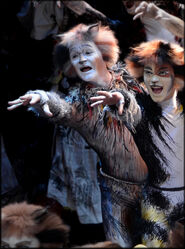 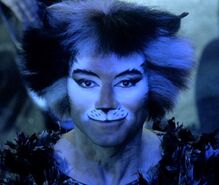 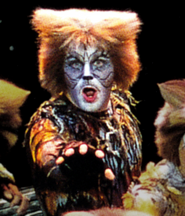