Animated film adaptations of Old Possum's Book of Practical Cats have been considered many times over the years, including adaptations of the musical. As yet, none have come to fruition.

T S Eliot specifically did not want his Jellicle Cats turned into cutesy cartoon cats and turned down a Disney animated feature of Old Possum's. Disney went on to make The Aristocats instead. According to Andrew Lloyd Webber, one of the first things Eliot's widow, Valerie, told him when he met her to get the rights to make the musical was "You, realise, don't you, that Tom turned down Disney?"[1]

According to Carlos Grangel, one of artists involved with the animated film, the project had different scripts and new characters created for it and was intended to be an ambitious movie that differed greatly from the traditional stage production of Cats. Carlos worked initially alone around 1992 in London, before having his studio, Grangel Studio, in Barcelona join the project. Another artist, Italian Luca Fattore, joined the project before the it was cancelled for the first time by Amblimation, due to a lack of agreement on various aspects within the higher level production team. The animated film Balto was created instead.

Advertisements for the then upcoming animated film, dated June 1990

In 1994, it was announced that Steven Spielberg's Amblimation was again set to begin production on a full-length animated feature version of Cats, to be released by Universal Pictures in 1997.[2]

Carlos Grangel was once again involved with the project, working in Los Angeles with Nicolas Marlet, another artist. However, Amblimation ended up closing in 1997 and the project was thus cancelled for the final time, and the majority of the animation team employed by Amblimation joined DreamWorks. The 1998 Cats film as we know it then went into production instead after the second preproduction cancellation.

Amblin Entertainment and Steven Spielberg went on to be involved with the 2019 Cats movie, and elements of their early concept art for the animated feature are recognisable in the style of the finished movie. 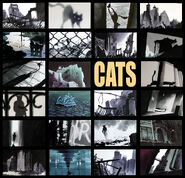 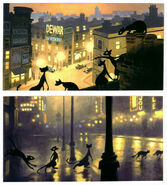