Adult
Alonzo is an ensemble character in the 2019 Cats movie. He is played by Bluey Robinson. Similar to his stage counterpart, Alonzo is a fierce protector of the Jellicle tribe.

Alonzo has several solo lines in "Jellicle Songs for Jellicle Cats" and takes part in all of the ensemble dances. He is very protective of his tribe, appearing rather wary of the newcomer Victoria initially. When the villainous Macavity shows up at the end of Bustopher's number, most of the cats run and hide, with only Alonzo, Munkustrap and Cassandra approaching him cautiously. After learning of Mungojerrie and Rumpleteazer's part in Old Deuteronomy's kidnapping, Alonzo is quick to react, hissing and pouncing on Mungojerrie, pinning the latter down. 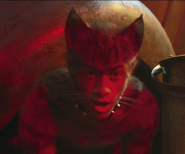 Feel free to add any headcanons or theories you have about Alonzo. But don't delete other people's ideas.