Admetus is an ensemble character in Cats. A young good-natured tom, his main function in the show is to be the ensemble identity for the actor who also plays Macavity.

The character originated in the London production, initially as a nameless kitten and only later given the name "Admetus". The role of Macavity's double was renamed "Plato" on Broadway. In productions that use Plato, the name Admetus is sometimes given to a male or female swing character.

Admetus is an easy-going and friendly character. Although one of the tallest males, he tends to behave more like a kitten and can be somewhat goofy. He remains in the background for most of the show, a strong dancer but rarely taking the lead. He and Bill Bailey are seen encouraging Carbucketty to scratch Grizabella, showing a lack of empathy and maturity.

Admetus often performs the pas de deux (known to fans as the "mating dance") with Victoria during the Jellicle Ball - this is due to his dual role as Macavity that requires great strength to throw Munkustrap during the fight, which makes lifting a small girl comparatively easy.

Admetus leaves the stage during "Gus: The Theatre Cat" to change into Macavity, and returns during the "Mistoffelees" number having reapplied his Admetus makeup.

In Australian-style productions, Admetus is a common chorus/swing cat, while Plato is the main role. In the 2001-05 World Tour, the Admetus swing was played by female performers. For the 2015-16 Australia/NZ tour, Plato was renamed to Admetus instead.

"Admetus" is mentioned in "The Naming of Cats" as one of the "fancier" but still "sensible" names. T S Eliot derived it from the Greek mythological king of the same name.[1]

Before he was given a name, the character was originally credited as one of "The Kittens" in the London production.[2]

The following names have also been used for the character of Admetus in various international productions:

Admetus is a tall adult male, ginger and white, with a distinctive ginger wig. Plato's costume was originally a completely different design, but since the release of the video, the London-style costume designs have been used with the Broadway-style names, leading to Plato often wearing Admetus' costume.

His makeup is relatively simple and elegant. This is due to the fact that the performer applies the Macavity makeup directly on top of the Admetus design, and then after Macavity's scenes the performer only has a few minutes to re-apply the Admetus makeup for the remainder of the show. 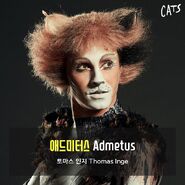 In the 1998 film, Frank Thompson is only credited onscreen as the Rumpus Cat, his ensemble role left unnamed. The film's website, which has some inaccuracies, credits the actor as "Admetus/Rumpus Cat", the former of which is usually an alternate name for Plato.[3] However, the film is based on the London production playing at the time in which a character named George doubled as the Rumpus Cat. The film costume is George's, however worn with softer makeup than onstage. Whether this was an error by the website or an intentional renaming of the character is unknown.