"The Journey to the Heaviside Layer"

T S Eliot
"The Ad-Dressing of Cats" is the final song of the musical and is sung by Old Deuteronomy.

After Grizabella leaves to begin her new life, Old Deuteronomy, still standing on the floating tire, summarises for the audience what we have seen and learned throughout the course of the show.

The lyrics for this number are taken from the T S Eliot poem of the same name from Old Possum's Book of Practical Cats (1939). The original London version had an additional verse that was cut when the show transferred to Broadway (italicized in the Lyrics section).

"The Ad-Dressing of Cats" is a grand hymn-like song. It is primarily set in the time signature of common time, occasionally switching to 2/4, and has a moderate ("moderato") tempo of 92 beats per minute. The first part of the song is composed in the key of Bb major, but shifts to B major as Old Deuteronomy instructs the audience on the proper way to address a cat. Old Deuteronomy's vocals span from Bb3 to G#5,[1] with the ensemble occasionally backing him in four-part harmony.

Old Deuteronomy:
You've heard of several kinds of cat,
And my opinion now is that
You should need no interpreter
To understand our character.
You've learned enough to take the view
That cats are very much like you.
You've seen us both at work and games,
And learnt about our proper names,
Our habits, and our habitat:
But how would you address a cat?

So first, your memory I'll jog,
And say: a cat is not a dog.

Ensemble:
So first, your memory I'll jog,
And say: a cat is not a dog.

Old Deuteronomy:
Now dogs pretend they like to fight;
They often bark, more seldom bite;
But yet a dog is, on the whole,
What you would call a simple soul.
The usual dog about the town
Is much inclined to play the clown,
And far from showing too much pride
Is frequently undignified.
He's such an easy-going lout,
He'll answer any hail or shout.

Ensemble:
The usual dog about the town
Is inclined to play the clown.
Again I must remind you that
A dog's a dog, a cat's a cat.

Old Deuteronomy:
With cats, some say, one rule is true:
Don't speak till you are spoken to.
Myself, I do not hold with that.
I say, you should address a cat.
But always keep in mind that he
Resents familiarity.
You bow, and taking off your hat,
Address him in this form: O Cat!

Before a cat will condescend
To treat you as a trusted friend,
Some little token of esteem
Is needed, like a dish of cream;
And you might now and then supply
Some caviare, or Strassburg pie,
Some potted grouse, or salmon paste:
He's sure to have his personal taste.
And so in time you'll reach your aim,
And call him by his name.

Ensemble:
A cat's entitled to expect
These evidences of respect.
So this is this, and that is that:
And there's how you address a cat.

Old Deuteronomy and Ensemble:
A cat's entitled to expect
These evidences of respect.
So this is this, and that is that:
And there's how you address a cat!

The Ad-dressing of the Cats Cats the Musical
1998 film 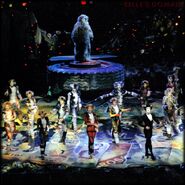 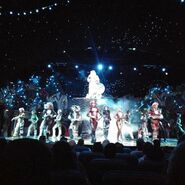 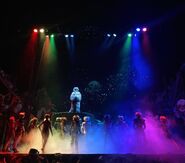 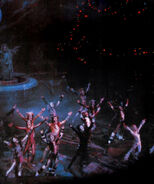 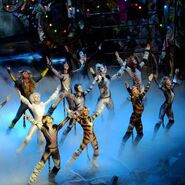 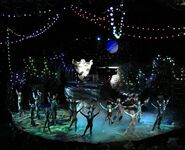